Hands-on training in real-world settings is a cornerstone of courses at Meridian Technology Center. For several students, summer proved to be a perfect time to sharpen their skills while building their résumé.

Seth Weeks went from working in his classroom at Tech to working for Meridian. Weeks, a recent graduate of the Facilities Management program, had experience in electrical work, appliance maintenance, general construction and heating and air conditioning from his time in the program. When Meridian had an internship opportunity in its maintenance and operations divisions, the program’s instructor, Bret Pickens, encouraged Weeks to apply.

“Seth is as solid as students can get,” Pickens said. “He’s dependable, self-motivated and a hard worker. I knew he’d be a great fit for Meridian. I also knew that he would be able to learn a lot working alongside Meridian’s team.”

Pickens was right. Weeks’ summer internship has been extended, and he will continue to work at Meridian through the fall semester.

Dillon Henry, a student in Meridian’s Network PC Support Specialist career major, landed a part-time job that gave him an inside look at what it’s like to provide tech support to an entire school district. As one of Stillwater Public Schools’ summer information technology assistants, he spent time in classrooms across the district performing technology checks on phones, projectors, computers and smartboards. He also helped set up more than 1,000 Chromebooks and the computer workstations for the district’s new Virtual Academy.

Because of his training at Tech, the Stillwater graduate already knew how to do basic repairs on laptop computers. This allowed him to work on more advanced repair projects on the district’s Chromebooks.

“I probably wouldn’t have been given those types of jobs without everything I learned last year at Meridian,” he said.

Now that he’s back at Tech, Henry is focused on fulfilling his duties as Vice President of Oklahoma’s Business Professionals of America chapter and preparing for Comp TIA A+ and Network+ industry certifications.

Shortly before graduation, representatives from JP Welding and Fabrication in Morrison reached out to Meridian’s Welding instructor Joe Steele to see if he had any students who would be interested in working for the company. Steele recommended Riggins without any hesitation. Not long after, Riggins interviewed and accepted the job. He spent his summer building parts for the oil industry as well as Ditch Witch.

“I’m glad that I was able to learn everything here,” he said regarding his time at Meridian. “There’s no way I would have been able to get a job without all of those certifications and the hands-on experience I got at Tech.”

Time in the field helped Riggins realize that he wanted to gain more experience in gas tungsten arc welding, so in August, he returned to Tech as a student in the Precision Metal Fabrication program. Now his alarm goes off at 4 a.m. every morning, and he’s at work by 5 a.m. His workday ends just in time for him to make the drive to Stillwater for class at 12:45. Riggins is at Tech until almost 4 p.m. and then heads home to do it all again the next day. It makes for long days, but he knows it will be worth it.

“It’s a lot to juggle right now,” he said. “But I just keep reminding myself that it will pay off later.”

As part of Meridian’s mission to educate, enrich lives and secure economic futures for individuals and industries throughout the district, connecting students with careers is a priority, according to Jeanie Zagar, Executive Director of Career Planning/Career Development.

“Instructors and Meridian’s Career Planning Center/Career Services team play a critical role in connecting students with employers,” Zagar said. “As you can see from the experiences of these students and many others, the campus wide collaboration among divisions benefits everyone.” 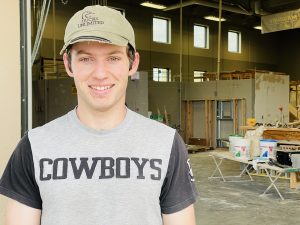 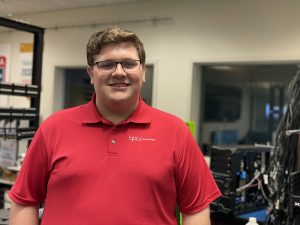 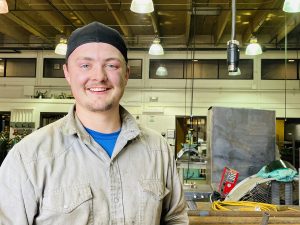