Three teams of Meridian Technology Center Pre-Engineering students have spent the last year working to solve specific problems for NASA through the High Schools United with NASA to Create Hardware (HUNCH) outreach program. Their hard work was launched into motion when they presented to NASA last week.

In search of a solution for eating while stationed on the moon for extended periods of time, Faeron Dewart-Cordray, Reagan Todd and Caroline Elkin developed an astronaut food bite dispenser that mirrors a PEZ dispenser. As a part of the design challenge, the team had to consider not only how to attach the dispenser to the astronaut helmet but also ensure their design could remain within reach for easy access in the zero-gravity environment.

The second team of students, which included Sam Glenn, Gage Allen, Wyatt Lopp and Seth Thibodeau, developed a prototype to help astronauts safely get rid of trash while in space without losing the air in the spacecraft. Using a soup can as a small-scale trash can, they demonstrated how pressurized air and locking mechanisms could be used to accomplish the task.

Students who participated in the HUNCH program could select from several options that also included creating a generic agriculture lab for the international space station or a lunar dust blower.

HUNCH programs tap into student creativity in the areas of design and prototyping, software, hardware, sewn items, video and media, and culinary. Meridian was one of 263 participating schools spanning 40 states. This is the second year that students have participated. Last year, a group of Pre-Engineering students was named a top-10 finalist.

“HUNCH is an ideal program for tech centers,” said Debbie Short, an instructor in the STEM Academy’s Pre-Engineering program. “Career and technical education has a focus on project-based learning programs. HUNCH helps spark the imagination and creativity of students across Meridian’s campus while bringing awareness to the broad scope and applications of STEM.”

For students in Short’s program, the project aligns with their senior capstone course, Engineering Development and Design. Students spend a semester researching, designing and testing a solution to a real-world challenge they have identified.

While working on their projects, students had the opportunity to support NASA’s mission with input from NASA employees, including astronauts, through virtual meetings.

“NASA will mix and match different ideas with what they want and need,” Glenn Johnson, NASA HUNCH representative, said in an email to project leads. “Some students may get called to help out with modifications. We never throw out your ideas because projects often get a second life and second look months or years later.” 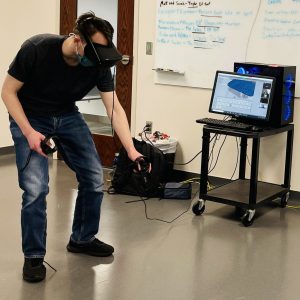 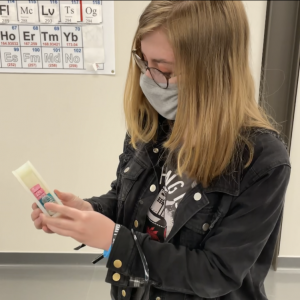 Faeron Dewart-Cordray shows how the food dispenser her team developed works to give astronauts hands-free access to food while on the Moon. 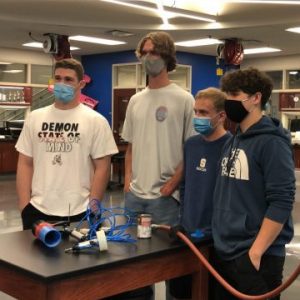