The state president of Business Professionals of America — an organization that includes 6,000 members in Oklahoma alone — almost didn’t run for office.

Brandon Connor, a senior at Path of Life Christian School in Guthrie and a second-year Business Technology student at Meridian Technology Center, was encouraged by his advisor to run. “I ignored it as long as possible,” said Connor. “I wouldn’t talk to people last year, I was nervous to speak in public.” When he attended the 2017 fall leadership conference, however, he changed his mind. “Seeing how the state officers operated and ran the meeting was awe-inspiring.”

The BPA vice president, Jakob Lavicky, also is a second-year Business Technology student at Meridian and is a senior at Stillwater High School. Lavicky, like Connor, decided to run for office after his experience with the state officers at last year’s fall conference. “Just the few moments they were on stage impacted me so much, and I wanted to do that for others,” he said.

Connor and Lavicky applied to run for office in February 2018 and then were vetted through two interviews and an exam. After they passed and were placed on the ballot, they and the 12 other candidates operated booths at the BPA state conference in March where they campaigned to their peers for eight hours, then wrapped up with a memorized speech in front of the 5,000 attendees. “I can honestly say those were the most hectic months of my entire life,” said Connor.

After a summer of training, the eight BPA state officers kicked off their term by hosting the joint BPA and DECA fall conference this week.

The theme of the conference was “Empower.” As the team led breakout sessions and organized the event, their goal was to empower the local members — not just leaders — to be the best they can be.

Connor has grown from this experience. “Now, I feel like I can do anything,” he said. He is currently working to create a speech team at his school and later hopes to study broadcast journalism to eventually become a news anchor — a goal that began when he competed in the broadcast journalism event at the 2017 BPA conference. In the meantime, he works at Braum’s in Guthrie, is a member of the National Technical Honor Society and is busy leading the state officers. As president, he coordinates his team as they plan service projects, coordinate events, and visit and support BPA chapters around the state.

“My goal is to influence our members to do the best they can, to empower each other and to run for office and get out of their comfort zones and do great things,” said Connor.

Lavicky has also benefited from the role as vice president, which makes him the chief communicator between state council and local chapters. “This experience has truly empowered me to become better,” says Lavicky. “I take initiative in every area of my life now.”

In addition to his activities at Meridian, Lavicky is part of his high school cross country team, is involved in his church, his school’s youth government and several clubs and honor societies. Lavicky wants to become an HR manager, and after earning his bachelor’s degree, his goal is to obtain an MBA from an Ivy League school.

Connor, Lavicky and the rest of the eight state officers will pass the baton to the next leaders at the state BPA conference in March 2019. “To anyone considering running for state office, or to anyone who is considering becoming more involved in leadership, I say without a doubt, do it,” said Lavicky. 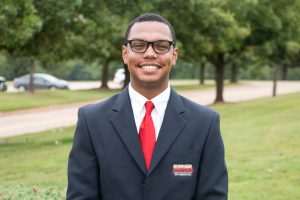