Ally Williams loves to help people. She works as a kids camp counselor, serves as the medical trainer for her high school baseball team and plans to eventually become a pediatrician.

This love is what inspired Williams, a senior at Guthrie High School, to join Meridian Technology Center’s Pharmacy Technician program her senior year. “I love it,” she said. “I’ve learned about 200 medications — I can take that knowledge anywhere in the medical field.” She is graduating from the program this month and says, “It has made me more prepared for the future, and some of my closest friends are people I’ve met here.”

Williams got into the colleges that she hoped to attend, but opted instead for a less obvious route to her anticipated career: She has enlisted in the U.S. Navy for the next four years. “I can do the same thing I want to do, but just through the Navy. I can still do it and not be in years of debt,” she said, explaining how the Navy will help pay for her college education. She can even attend college while she is serving.

Williams didn’t plan to join the military, but calls from recruiters piqued her interest. She met with representatives from the Army, Navy and Air Force to find out more. “I told my Navy recruiter, ‘To be honest I know nothing. We are starting from the very bottom,’” she laughed.

Williams appreciated the connection and support she received from the Navy, as her recruiting officers contacted her and visited her high school regularly. This relationship helped her to decide that if she was going to join the military, the Navy was where she wanted to be.

“I just decided, well, if it’s meant to be, it’ll be.” Williams took the Armed Services Vocational Aptitude Battery test without studying. She passed.

Although having her college tuition paid for was a large deciding factor for joining the Navy, a deeper reason drove her as well.

“My mom has been fighting stage four cancer, and this just felt like something I needed to do so that one day I could give back to her by making her proud,” said Williams. “I want to give back to all the people who supported me and helped me get to where I am.” She said she hopes to make them proud as well. Williams expressed her gratitude for the people who have been there for her — both in and outside of her immediate family.

Williams said that one of the selling points of the Navy was her recruiter telling her that family comes first. “If something were to happen with my mom, no matter where I am, I could come back,” said Williams. She explained her concern about going straight to college. If she needed to come home to care for her mom, it would be difficult to leave and then catch up with her classes. The Navy will give her the flexibility and support she needs.

Williams will serve by managing and operating the variety of stores and services available to sailors on ships. These keep up morale for sailors who spend long periods away from their homes, families and the many small comforts that come with them. Her training as a pharmacy technician will carry over in this role, with both positions hinging on excellent customer service, attention to detail, organization and accuracy.

In August, Williams will ship out to basic training in Great Lakes, Illinois. After that, she will head to Meridian, Mississippi, for the next level of training, called A School, where she will learn the technicalities of her job. After she finishes serving, Williams plans to complete her education and enter the medical field. 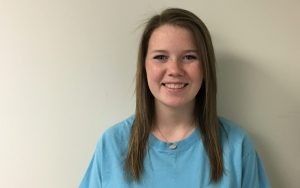