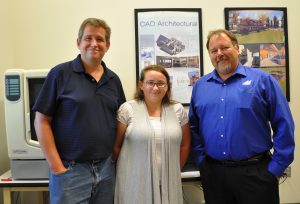 When Dennis Biggs walked into the Computer Aided Drafting classroom at Meridian Technology Center the first thing he noticed was that nothing was as he remembered.

“Everything’s changed,” he said with a quiet laugh. “When I was here, the room was filled with drafting tables. The only thing that I even recognize from my time as a student is Mr. Frick.”

Dennis enrolled in the Drafting program at Meridian in 1995 and was one of Computer Aided Drafting instructor Russell Frick’s first students. Now 22 years later, his daughter Trinity is taking her place in the same classroom.

From a young age, Dennis knew that he wanted to go into design. He got his first drafting table when he was 11 years old. In middle school, he took part in summer camps at Meridian that introduced him to drafting, welding and machining. When the time came for him to enroll at Tech in high school, he enrolled in the drafting program. During his junior year, he designed his uncle’s house and remembers that Frick let him use it as a class project. After finishing the mechanical design program while he was in high school, he returned the following year to complete the architectural arm of the program.

Following his training at Tech, Dennis began working for design and construction businesses across Texas and Oklahoma. During the summer of 2013 he worked for a builder in Texas and became a partner in the business. Home was calling though. Two years later Dennis and his partner divided the business, and he moved back to Guthrie and opened Biggs Design and Construction. Since 2015 he’s worked on projects big and small, ranging from new construction to remodels with current projects across the Oklahoma City metro area and throughout Logan county.

One of the perks of growing up in a family business is the first-person perspective. Trinity recognizes that she grew up with a unique view of what it meant to be a designer. She remembers spending a lot of time with her dad while he was working on projects. She can even recall a time where she wanted to design her own house.

She has chosen, however, to create her own path. Now her creative outlet comes in the form of drawing people, focusing on depth of field, expressions and anime, a Japanese-inspired form of animation.

“My plan is to go into graphic design,” she said. “I know from watching my dad that the computer programs that I’ll work with in CAD will give me the foundation I need. I also know that he’ll be able to help me with my homework.”

In her two years at Tech, Trinity will be able to bring her ideas to life using advanced design software including AutoCad, a design software that produces 2D graphics as well as 3D models; Revit, a software architects use to design full 3D models of residential and commercial buildings; and Lumion, a graphic visualization software that uses the models created from AutoCad and Revit to add graphic realism such as trees, foliage, terrain and animation.

“We spend a great deal of time talking about dimension, lighting, materials, realism and the design process,” Frick said of the curriculum that Trinity will have in his program. “All of that will benefit Trinity as she moves from CAD to graphic design.”

Trinity is confident she’ll get the best of both worlds through Computer Aided Drafting.

“I’ll actually have the skills to do everything that I want,” she said. “When I graduate from this program I’ll be able to help my dad and advance my animation. I’ll have options.”

As for Dennis, he couldn’t be more proud to see his daughter find her passion in the same classroom and with the same teacher that he did so long ago.

“We’ve come full circle,” he said. “I’m sure Mr. Frick’s teaching style has changed over the years, but I’m confident that she’ll graduate this program with the skills she needs to succeed in whatever she decides to do.”

Dennis Biggs enrolled in the Drafting program at Meridian in 1995 and was one of Computer Aided Drafting instructor Russell Frick’s first students. Now 22 years later, his daughter Trinity is taking her place in the same classroom. From left to right are Dennis, Trinity and Frick.