When Dillan Grider isn’t in the Precision Metal Fabrication program at Meridian Technology Center, he’s busy helping out on his family’s farm.

Grider Farm, a 45-acre family farm in Perkins, is best known for its pumpkin patch, petting zoo and corn maze. However, after the pumpkin patch closes on October 31, the work will really begin for Grider and his family.

“We’re working all year long. Farm work is never-ending. There is no offseason,” he said of his family’s commitment to agribusiness.

In fact, the offseason is part of how Grider found himself at Meridian.

“I grew up welding on the farm, but I never knew how to weld right,” he said. “I came to Meridian to fix that.”

With one year of welding and fabrication under his belt, Grider has earned industry certifications in MIG and TIG welding. His improved skills have enabled him to take on more tasks on his family’s farm and a neighbor’s farm where he also works.

“In one way or another, I put the skills I’m learning here to work every week. There’s a lot of upkeep that has to be done on the farming equipment. Now if something breaks, I take a look at it first,” he said. “Both farms also have a lot of pipe fencing, and I’m able to do a lot more of the repairs on them now.”

Grider is now gearing up for the work that will take place next month.

“We’ll cut the corn maze down, clean up the pumpkin patch and start making plans for what we’re going to do next year to make it a better experience for guests,” he said. “Even though my family has been doing this for more than 20 years, we’re still learning and growing every season.” 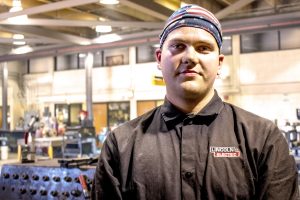