Walt Sumner had worked for 22 years at a telecommunications company before he took advantage of a company-wide voluntary early retirement offer from new ownership.

During this time off, he heard about the program that started this fall at Meridian.

“I could see a broad spectrum of career potential in the energy industry,” said Sumner, who enrolled in the first cohort, “and the timing was really good for me to focus on education.”

Meridian’s two-year Energy and Power program is the first of its kind in Oklahoma’s Career and Technology Education system and is working closely with industry professionals to provide valuable workers for Oklahoma’s energy and power industry.

“Stillwater Energy Center and Central Electric Cooperative are both a part of our advisory board,” said Jeff Littau, the Energy and Power Instructor. “Both have been very helpful.”

The Oklahoma Works initiative’s 2018-2020 Critical Occupations list says job openings for Electrical Power Line Installers and Repairers will increase by 14 percent in the next 10 years.

Finding workers to fill these and other jobs in the energy industry may be difficult. According to the 2018 U.S. Energy and Employment Report, in 2017 over half of Oklahoma’s energy-related employers hired new employees, and of these, 100 percent of transmission, distribution and storage employers and 84.6 percent of energy efficiency employers said it was difficult to find hires.

Sumner is now a Power Systems Technician at Stillwater Energy Center. “I had seen the job posted a couple of times [and became interested] after our class tour of the facility,” said Sumner.

“Coupled with my work history and experience, being a part of the Energy and Power class greatly increased my chance for the position by showing my interest in the field and willingness to learn,” said Sumner.

Energy and Power students receive an education in the generation, distribution and use of energy. They will cover topics such as basic motors and generators, hydraulics and hydroelectric power, power distribution and design, power efficiency, clean energy and more.

They will also be qualified to test for their FAA Remote Pilot Certificate for unmanned aircraft systems and gain OSHA 10 and CPR certifications, as well as the opportunity to receive a WorkKeys Career Readiness Certification.

“I’ve always wanted to be able to do something in the energy field,” said Swinford. “This class will give me the background information that I really want and need to be able to possibly pursue a career in a power plant.”

Swinford describes the class as starting with “an electrician’s job and working up to an engineer. We go from wire transformers to robotics to turbines — almost everything in the energy field.”

Other students are already interested in becoming linemen or finding jobs in power plants as well. 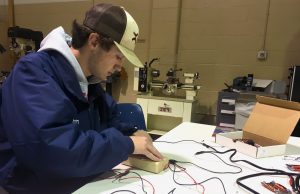 Isaac Swinford is planning to pursue an education in Aviation and Space, or Power Plant Technologies upon graduation. 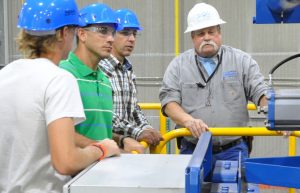 Walt Sumner (third from left) was hired on at Stillwater Energy Center in December. He discovered his interest in the position while attending Meridian’s Energy and Power program.