The conference was Aug. 1-2 at the Cox Convention Center in Oklahoma City. It attracts some 3,700 CareerTech educators from across the state and is one of the largest professional development educator conferences in the state. OkACTE is the professional organization for the state’s CareerTech administrators, teachers and staff members.

The Francis Tuttle Career Excellence Award was established in 1985 in honor of Francis Tuttle, former state director of the Oklahoma Department of Vocational and Technical Education and architect of what is now called the CareerTech System. The award recognizes individuals whose careers exemplify Tuttle’s dedication to the development of people through career and technology education. It is given only to a recipient who has made contributions of state or national significance.

Before becoming Meridian Tech’s superintendent, Major served as superintendent/CEO of Pioneer Technology Center in Ponca City. He has served on numerous local, state and national boards. Major was selected to participate in the first National Leadership Institute sponsored by the National Centers for Career and Technical Education and is a past president of the Association for Career and Technical Education.

On the international stage, Major traveled to Harbin, China, to collaborate with Harbin Railway Construction Engineering School. The trip was part of a national effort to develop new resources and methods for producing skilled workers through an expansion of China’s technical education system. The Chinese government is working to increase the number of students at vocational schools to 38.3 million by the year 2020. 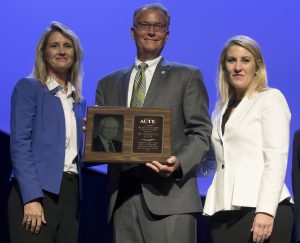