School may have not been in session, but this summer was still an exciting time for Meridian Technology Center students.

Five Digital Media students took home prizes at state and national competitions. High school senior and MTC second-year graphic design student Braydon Lettkeman won second place in the Graphic Arts Education and Research Foundation 2018 Student Design Competition. The theme of the competition was “Dominate the Display!” and required students to create a brand and packaging design for a fictitious product of their choosing. The designs were judged on compelling and influential design, product and brand identification, fit to the product container, creativity and originality, and use of printing enhancements.

Lettkeman decided to create a brand of hair dye. “It’s always the same boxes with the face on them, so I decided to go 80s,” said Lettkeman. He called his product “Glam Metal Hair Dye.” The contest drew 465 entries — a significantly larger number than Lettkeman was expecting. “I thought it was small, so I entered,” said Lettkeman, also adding that his instructor, Michelle Moore, encouraged him to enter.

Even when he found out how large the competition actually was and became unsure of his chances for winning, “I gave it my all,” he said. Weeks of hard work paid off, however, and he won $1,500.

Lettkeman said that he also received valuable real-life experience as he hopes to continue pursuing graphic design in college.

In May, video production students Luke Cheatwood, Evalyn Harper, Brody Polly and Lucius Owenby received first place for their short film “Wake Up! The Advantages of More Sleep” at the Elkhorn Valley BEA D7 Film and Media Conference.  When originally making the film for the Business Professionals of America state competition, they were assigned the topic of sleep education. Their challenge was to make facts creative and interesting. They took second in BPA.

“We had to make a short film and then add those factual elements,” said Cheatwood, a Stillwater High School senior and second-year Meridian student. To do this, they wove together several story lines and interviews with experts.

Throughout the process, the team gained valuable real-life experience. “It kick-started my skills. I definitely wouldn’t be where I am as an editor,” said Harper. She hopes to be a writer eventually and got the opportunity to write most of the script for this film. Cheatwood said that he got experience directing a film, which is what he wants to do in the future as well. 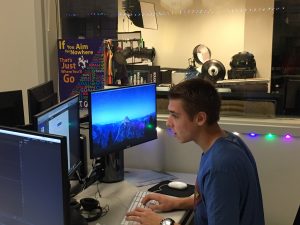 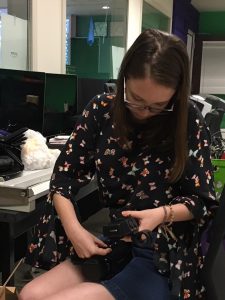