The Samuel King (Edmond/Guthrie) Chapter of the Daughters of the American Revolution (DAR) has awarded scholarships to Meridian Technology Center students Kaylee Clopton and Elizabeth Miller.

Clopton is a student in the Administrative Assistant career training program in Meridian’s Business Technology program. Miller is enrolled in the Design Architectural Specialist track of Computer Aided Drafting. The scholarship is able to be used for tuition or program-related expenses.

Representatives from the DAR contacted Meridian Technology Center earlier this year with the scholarship opportunity. To apply, students had to submit an application and three letters of recommendation. Clopton and Miller received the scholarship during the DAR meeting at Oak Tree Country Club in Edmond. The DAR voted to award this scholarship on an annual basis.

The DAR is a women’s service organization that is dedicated to promoting the historical preservation, education, patriotism and honoring patriots of the Revolutionary War. It is a lineage-based organization whose members are direct descendants of someone involved in the United States’ efforts torward independence. The Samuel King Chapter of DAR was formed in 1976, with 15 members. In 1998, the Samuel King and Guthrie chapters merged. Membership now includes residents of Edmond, Guthrie, Cashion, Arcadia and smaller towns in northern Oklahoma County and southern Logan County. 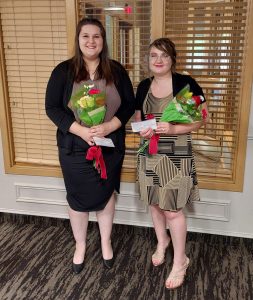