It’s still early in the school year, but Henry Rohlfing already knows he will complete the Information Support and Networking Systems program at Meridian Technology Center with an A+.

Rohlfing, a senior at Stillwater high school and a second-year student at Meridian, earned his CompTIA A+ industry certification earlier this year.

The Computing Technology Industry Association (CompTIA) is the largest provider of information technology certifications. Since its establishment, CompTIA has issued more than two million IT certifications.  Rohlfing now accounts for two of those certifications.

Before he finished his first year at Meridian, Rohlfing earned the IT Fundamentals+ certification. This online test is a pre-career certification that is designed to help students determine if a career in information technology is right for them. Rohlfing aced the exam. With one certification under his belt, he quickly began to study for the next exam, the A+ certification.

“Passing the first test gave me the confidence I needed to start preparing for the next level,” he said. “I set a goal to take it over the summer.”

“It’s very unusual for high school students to earn this credential,” Little said. “For Henry to do this after just one year in his program speaks volumes about his commitment and dedication. He is always willing to put in extra work, so the fact he did this so early isn’t that surprising.”

Rohlfing’s determination has already paid off. In addition to passing his CompTIA exams, this spring Rohlfing and his teammate Malykaii Arnold won first place in the Network Design Team skills contest with Business Professionals of America, a CareerTech Student Organization that is associated with his program. Their win at the state level allowed them to advance to the national contest, where they placed eleventh.

Rohlfing was also just named an intern for Meridian’s Information Systems department. In addition to his time in his program, he now spends Tuesday and Thursday mornings learning on the job. In this role, he works alongside two former Information Support and Networking Systems students and Meridian interns who are now full-time employees.

“I’d love to find a part-time IT job while I’m in college next year. Knowing they have the same skills I’m learning in class and now getting on the job, makes me really hopeful that I’ll be able to get a job when the time comes,” Rohlfing said.

Following his time at Tech, Rohlfing plans to attend Oklahoma State University, where he already a concurrent student, to study Management Information Systems. He is currently preparing for the CompTIA Network+ exam. 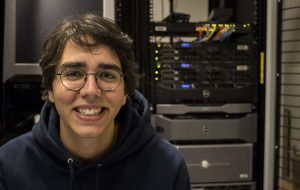 IT student earns CompTIA A+